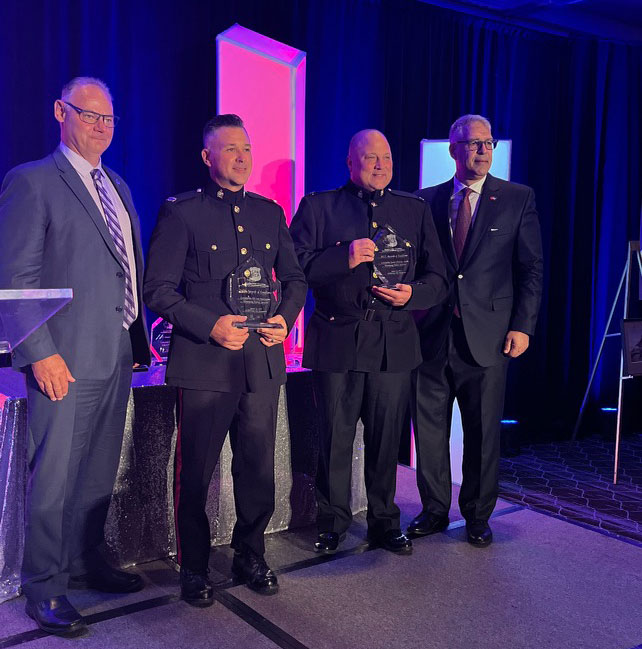 Fredericton, NB: Winnipeg Police Association (WPA) President, Maurice (Moe) Sabourin, was proud to present the Canadian Police Association (CPA) Award of Excellence to two WPA members last night at the CPA awards banquet in Fredericton. Constable Jason Towle and Constable Oli Hanneson were nominated by WPA treasurer Ward Gordon in relation to an incident that saw them go above and beyond the call of duty. Constables Towle and Hanneson were selected for this prestigious award from numerous nominations from across Canada.

The CPA presents the Award of Excellence every two years to recognize members who perform whatever is necessary to protect citizens in their local communities.

On April 29, 2018 at approximately 2:30 PM, general patrol members Towle and Hanneson were working in Winnipeg’s East District and were in the area of Martha Street and Henry
Avenue. The Constables both smelled smoke and then observed smoke coming from the area of the Disraeli Freeway. They soon came across a Winnipeg Fire Paramedic Service vehicle and advised them of the potential fire.

Constables Towle and Hanneson then preceeded to a residence at 57 Lily Street and observed the top floor fully engulfed in flames and black smoke billowing from the house. Winnipeg Fire Paramedic Service arrived directly behind them and began to set up for an exterior attack on the fire.

Constable Towle and Constable Hanneson immediately ran into the residence which is a multi-unit, three-story home. Both Constables began directing residents from the main floor out of the house, including a mother and father and their three-year-old daughter. They proceeded up to the second floor and continued to direct residents out of the house.

Both Constables were treated for smoke inhalation by Winnipeg Fire Paramedic Service and Constable Towle was transported to Hospital where he was treated and released.

As a result of their heroic efforts 10 residents were safely evacuated and two residents were transported to hospital – one in unstable condition with complications due to smoke inhalation.

If not for the heroic actions of Constable Towle and Constable Hanneson it is very likely the fire
would have resulted in far more serious injuries and possibly fatalities.

Contact:
Ward Gordon
Treasurer
Winnipeg Police Association
204 996-8493
This email address is being protected from spambots. You need JavaScript enabled to view it.